This weekend was the Community Event for Pokémon Go.  It was a six-hour event spread over two three-hour times.  The challenge was to catch as many Eevee as possible and especially the special “shiny” ones.

I had the good company of my friend Kelly on the first day.  We had a successful hunt yesterday.  Today, however, the folks who were going to join me had to do other things and I went it alone.  The venue I chose for my hunt was one that affords both comfort and opportunity.  I was alone but in a vast crowd of my tribe.

There happened to be a comic book convention in the same building where I set up my Pokémon blind.  The comic convention was designed as a family event to introduce children to comics.  This resulted in a stream of costumed children filing by as I was catching Eevee.  Many of them stopped to see what I was up to.  I was please to have conversations with small versions of Wonder Woman, Batman, Spider Man, Batgirl, the odd wizard,and a few Pokémon characters. 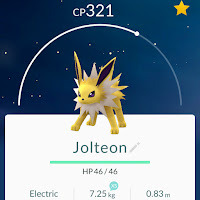 The prize moment for me was when a wee lass dressed as an Eevee ran up to me very excited.  She whispered loudly, “I will let you catch me as long as you don’t crush me to candy or evolve me to a Jolteon.  They are just too spikey.”

I pretended to toss a ball and she pretended to be caught.  Her parents watched bemused.  Small children free of inhibition touch my heart in a unique way.  I promised to not evolve her or crush her to candy.  She went on her way not knowing how much she salved the deep loneliness with which I struggle today.

A silly game and the introduction of children to comics is not much taken by itself.  If, however, we consider the way in which both events can build community from strangers there may be something more there of value.  If I keep thinking beyond the obvious I see how aid came unknown when I needed it.  That is a lesson in faith that is no small thing.