The Crimson Thread – The Offering of Isaac

This is one of those stories that both bothers and encourages me.  Abraham is told by God to take his only son into the wilderness and sacrifice him as he would a sheep or goat.  The tradition of animal sacrifice is common and some that follow other gods practice human sacrifice. 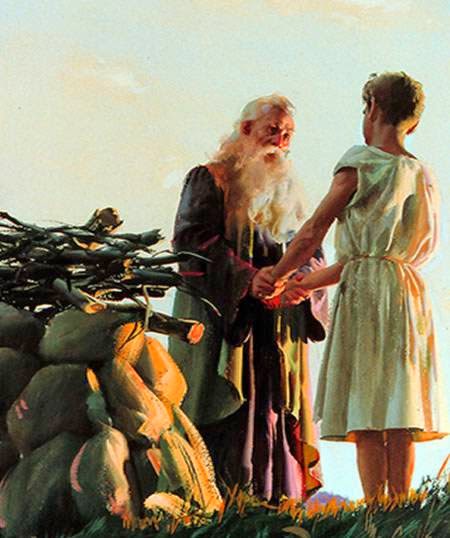 Isaac is old enough to ask questions.  I cannot imagine the pain for Abraham in the questions his son asks.  Where is the lamb?  How do you tell your son that God wants you to kill him?  It sounds insane.  It sounds monstrous.  Even the response that one must have faith that God knows what he is doing sounds lame and crazy.

In all of that Abraham does the only thing one can when God has eaten at your table.  He obeys in faith.  In the most dramatic way God intervenes.  He stops Abraham as the knife is raised to strike.  He then reveals his purpose by providing a ram for the sacrifice.

The entire drama is for the effect of showing us that God will provide the sacrifice necessary for our sin.  God will be the sacrifice for our sin in the form of the Son.  His arrival for that purpose is still two thousand years away.  Today he will comfort his friend with the understanding that they are moving the story forward.  They are weaving the thread of redemption into the tapestry of the world.

For now I am to see that even when things seem horrible wrong God is at work.  I am to follow in faith even when I do not understand God’s plan.  I and people dear to me are walking through such a place right now.  God will provide a way.

Here's wood and fire, where's the sacrifice
A questioning voice and the innocent eyes
Is the son of laughter who you waited for
To die like a lamb to please the Lord


Mat 13:52 So Jesus said to them, "That is why every writer who has become a disciple of Christ’s rule of the universe is like a home owner. He liberally hands out new and old things from his great treasure store."
Posted by Aramis Thorn at 7:08 AM