The Once and Future Captain

For most of you today is another Thursday and your thoughts are already tuned to Friday. For me, my thoughts are on birthdays.  My younger Grandson had his sixth birthday this weekend and the years seem to go by at light speed.  I shall celebrate him well.  Today, however, my thoughts are on a birth that is past and yet to come. 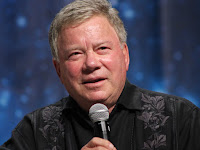 When William Shatner was born on this day in Montreal, Quebec, Canada no one imagined that he would go on to become the icon of one of the most enduring franchises in entertainment history.  I agree with every good thing that has been said about him and his impact on our culture and entertainment.

I wish to focus on an impact less known.  He is partially responsible for my being who I am.  Captain James Tiberius Kirk showed up in 1966 when I desperately needed a hero.  I had one, my Grandfather, but my father was absent and the other adult males in my life were not up to the task.  Since that first season the charter created by William Shatner has been key in my seeing hope in the universe.

Until I found faith eight years later it was my only source of hope after my Grandfather went on to that undiscovered country.  William Shatner continued to both struggled with and build on that character until Kirk’s demise in the movie Star Trek: Generations (1994).   I and several of my adult friends wept over this.

When I got to meet William Shatner a few years ago it was my honor to thank him for giving hope to a fatherless boy.  He smiled softly, his eyes looked deep into mine, and he returned my thanks.  Thank you again sir.  Happy birthday to you and the Captain to whom you gave life.  He is not due in our time line until 2233.  We shall both be in that undiscovered country by then.  He already lives, however, in the good he has done us all.  I owe you a debt.