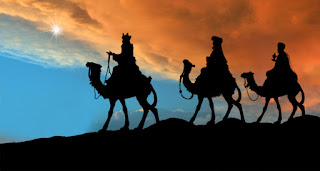 We do not know their number or when they first began to prepare for their journey to Bethlehem.  Their understanding came from centuries of tracking the movement of the stars and their knowledge of the people of God.  We need to recall that there existed no distinction between astronomy and astrology in the first century.  These men were very powerful in their knowledge and influence in the ancient world.

What we take from this part of the story into this time is the wisdom of seeking Christ always.  To carry Christmas in our hearts we must be constantly seeking Jesus.  We must be faithful in our love and in our following of him.  Later this year my new book on this subject will be available.  To close our Christmas writing time, and to excite you for Christmas yet to come I will give you a snippet.  First, however, I greatly desire to remind you of our purpose in this long series.

Before we put away Christmas until December beacons again, I plan to live out the year carrying Christmas in my heart every day.  Winter will get colder.  Spring will come with the rebirth of life and thoughts of Holy Week.  The summer will carry its heat and leisure where my mind thinks of baseball and beaches.  Autumn will see the slumbering world turn dark and damp again.  In every season, from December to December, I will keep my small pewter Nativity directly in front of me as I write.  I will think Christmas thoughts every day by trying the infuse that day with love, joy, and kindness centered on Jesus and his gift to us.

You see, Dear Reader, none of the other things that lead to our reclamation are possible without the birth of Christ.  So, the celebration of Christmas is echoed in all the year as we see how the story unfolds.  We can see the heart of Christmas in every season if we determine that we will follow Christ in his desire for us to be loving and good to everyone.  Tomorrow we will ask a question about a statement on many lips.  Today, however, here is one more bit of a tale to remind us that there is always room and time for another Christmas song.

As the first stars appear in the eastern sky, Nahor and Terah watch the young men returning from the hunt.  It is clear that the brothers have had a successful venture hunting.  Each carries a fresh kill over his shoulders.  Servants meet them at the edge of the tent and take the game to prepare it for tomorrow’s feast.

The men of Terah’s family will depart in two days.  They are headed south to Canaan.  The journey will be one-way.  The intent is to settle in the land but they do not yet know where.  Since the death of Haran, the family has been uneased.  The Son and the Messenger Djinn have been here often over the last month.  The Messenger Djinn, Gabriel has been teaching Nahor of a new role in the service of the Son.  Nahor has been designated the first Gift Bearer of the Chaldees.  Gabriel has spent much time at the top of the great tower teaching Nahor about the stars and the stories they have to tell.
They focus on the Ram and the King’s Star.  Gabriel explains why his father and brother must journey away.  Whilst he does the Son spends time with Terah, Abram, and Lot detailing the purpose of their migration.  Gabriel also passes on how important it is for the Gift Bearer to pass on what he knows to his children and to other Chaldeans of good heart.  Gabriel and Nahor descend to join in the last feast with his father, brother, and nephew in Ur.

So, it is that as the last grains of winter slip through the pinch that the caravan of Abram begins the journey to Canaan.  In the same day and night, the Gift Bearers; the Magi, begin their watch.  For centuries they will pass down their knowledge and gain more wherever they can.  They will be apart from the nation that springs from Abram’s family.  They will also make sure that among his clan are trained Gift Bearers.

As centuries of sand slip through the pinch, we find the nation that was once a family about to return to the land promised them by the Father.  Even as Thanatos, the Angel of Death begins his walk through Egypt, on a similar spring night, Iscah sends a group of faithful Magi to the East.  They journey to prepare a place for the gifts to be safe.