Songs in the Darkness ~ End of Dreams

And where do you go,
When you get to the end of your dreams?

We all have dreams.  There are things to which we aspire, things we wish to do, and hopes we long to realize.  We sometimes invest all that we are in those dreams. 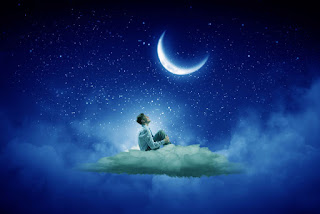 There are days, however, when one realizes that the dreams will never materialize.  For me, it was because the dream I pursued was not in line with truly following Christ.  I had convinced myself that it would serve, but I was trying to build something that was not right for me.  I tried to construct something to mitigate the effects of the darkness on me.  My dream was to use control and order to hold back the darkness that plagued me.

Instead, my life is supposed to be a light in the darkness.  I was speaking with a friend about this earlier this week.  We cannot prevent the darkness from coming, it happens every day.  What we can do is realize that we have songs to light the darkness.  We have someplace to stand at the end of our dreams.

The truth for me is that at the end of dreams, that edge of darkness, I found that dreams from long ago awakened in me.  When I gave up the dreams I had manufactured and allowed my heart to only dream of the Father, I was given new dreams.  They were renewed from decades ago.  They held no desire for mitigating inner darkness just to keep it at bay.

What I found at the end of my dreams was a way out of the internal darkness.  I found songs in the darkness that let me see that I was meant to light the darkness around me.  I was intended to allow Christ to deal with my pain and anger.  Instead of using my own devices to ease it, I was to focus on love and light in the eyes of others.  I am meant to have dreams of being light for others, or rather, reflecting the light of Christ in me to others.

At the end of the dreams, we create that are not Christ-centered are new dreams, new visions of what can be if we yield to Christ alone.  For years I had prayed for dreams that would feed my defenses instead of dreams that would serve others.  I began to tell the Father that he could do whatever he needed to do to me in order to accomplish his vision for us.  I warn you that is a dangerous prayer but a righteous one.

As I shed my mind and heart of the things, I had taken on to hold the darkness at bay, new songs began to arise.  Old songs took on a new life.  These songs are made of light and come from a different place inside me.  When I came to the end of MY dreams, I was able to begin to see the dreams that Father has for me.

We have to travel through the darkness, Dear Reader.  In that journey, we are meant to be light so that others can find something to follow in the darkness.  I do not wish them to follow me.  Instead, I long for them to see the love of Christ in me and follow him.  It is not the lighthouse that matters, but rather, the light that it bears.  My dream now is to sing songs in the darkness that draw others to the safety of that light.  Will you sing with me whilst we sit a little longer?