If we are going to be honest, this should cross our minds every day.  It should be in our view constantly until it is unnecessary.  I am not saying that other things do not deserve our attention as well but the deep truth of it is that as long as there are humans selling other humans, we have a plight with which we must deal.

The ENDIT Movement exists to shine a light on human trafficking and slavery.  Tomorrow, February 13, 2020, is the day that they as for us all to raise the flag of awareness.  This is the seventh year that the #ENEITMOVMENT is working to shine a light on slavery.  There are over 40 million men, women, and children in some form of bondage around the world.  Even in countries where there are lower numbers the awareness is not high enough. 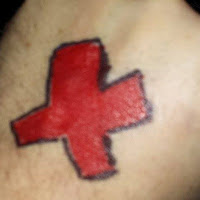 Here is what you can do:
Get educated.  The End IT site has vast resources
Spread the word:  Share this post
Raise Awareness:  Wear a Red X on your hand and when people ask why, tell them about human trafficking and slavery in our world.

There is no room in the world for the owning and abuse of other humans.  Join me, Dear Reader, in demanding and working for change, for freedom.  Help me shine a light on slavery.  Help make our world one where it is no longer tolerated.
Wishing you joy in the journey,