Because I study the ancient world for my fictional writing, I come across much about the mystical and alchemical.  As science and mysticism grew apart, that which remained for some time was arcane and little understood by the masses. 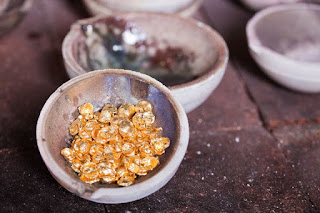 One such thing was the belief that one could somehow transform lead into gold.  I first read about this when I was seven.  I read that one of the ways in which alchemists attempted to do this was boiling lead.  I spent an entire afternoon that summer boiling some lead shot on my mum’s kitchen stove.  In my defense, I was left alone and had been told to read.

Years later, I read further about this and found that the attempt to do this had resulted in heavy water and some terrific explosions.  Fortunately, my system was not a closed one.  Also, I did not spend but a few hours boiling and replenishing the water.  It is still true that I was determined to create a pot full of gold beads.

The process, transmutation, has been successful on a very narrow scale.  The difficulty is that were it successful on a larger and equitable scale, the value of gold would decrease from the bounty of it that would exist.  When people describe heaven, they sometimes reference that the streets are made of gold.  This is not a statement of affluence.  It is a commentary on value.

In our world, gold is a treasure.  In the Father’s world, it is simply a building material.  What is valuable is the redeemed soul and the transmuted heart.  What we are meant to invest in is spiritual alchemy.  We are to use love to transmute hatred to even more love.  We are to refine our lives so that the dross is burned away, the elements that produce hatred are inert, and that which remains is love.

I cannot change lead into gold.  I can change anger into peace.  I am able to transmute bad into good.  The impossible idea of getting everything back to good becomes possible and probable in the light of Christ.  It is in the constant burning away of self so that what remains is the love of Christ.  For now, Dear Reader, we do that in faith and hope. Those too will burn away until all that remains is the love of Christ evidenced in the transmuted souls of those he loves. This is the transmutation, the transformation that produces the greatest value.