What Does It Matter? ~ Long Lines

We have seen the memes about the lack of open registers at some large stores.  Recently I was waiting in line at the store with a few items.  There were three people in front of me and the other open register had line six deep.  There were four other closed checkout stations. 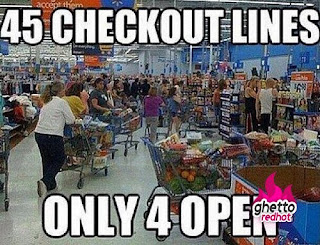 The guy in front of me turned and let out a long complaint.  He was obviously irritated and desired a fellow traveler with his impatience.  Immediately, I was instead irritated by his complaint.  The constant internal war between my fallen and redeem natures was at once in full conflict.

I wished to chide the man for his impatience.  I did not, however, know what his circumstances were.  Pride asked me to feel good about my not caring about the line length.  Then I recalled that it was just as wrong to be impatient with this man without cause.  I saw that I needed to engage with the human.

To do this without agreement or judgment required not answering and not chiding.  I asked him about the rest of his day.  He was in a hurry to get to lunch and was picking up something to add to the repast.  Again, my fallen self wanted to judge him for waiting until the last minute.  I shoved that down and really listened as he continued.

The man went on to say that he was invited to see some family that he has not in quite some time.  He was anxious and unsure of what to bring.  He had chosen crackers, cheese, some summer sausage, and a nice bottle of wine.  I told him that I thought his choices were spot-on.

Once I was distracted by showing love and kindness to the man, his impatience and my foolish irritation dissipated.  We talked about his family and were at the cashier in less time than we both anticipated.  He left, hopefully, more hopeful.  I saw the same man a church yesterday.  He did not see me but I realized that he walked past me to his seat every Sunday.

I was thankful that the Father loves me enough to nudge me to put love first.  What does it matter that someone is anxious and irritable when it gives me the opportunity to show love?   Love must never be trumped by long lines or anxiety.  I must be loving no matter how others are acting.  I must include in that not judging them for that behavior.

It is choosing what matters over my agenda and self-righteousness.  I must be certain that I do not set aside love for temporary smugness or insensitivity.  What matters is that I capture the thoughts before they get lease to express themselves.  As we travel, Dear Reader, we must remember that love is what matters in long lines.  This will aid in making us unoffendable.