What Does It Matter? ~ Toothpaste and Toilet Paper

My friend Stephen has a lovely family.  His wife was a model in her twenties.  His children are both intelligent and well-behaved.  His home is large and comfortable.  The few times I have been there, the food served was simply marvelous.

The last time I was there, I noticed a change that motivated my curiosity.  The guest bathroom located in their large family room is very nice.  When I went in to use it, the toilet paper roll had reproduced amoeba-like.  Next to the one I knew from previous visits, was an identical one.  It took me a moment to notice the difference. 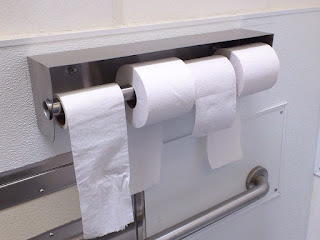 The identical rolls hung with the paper facing opposite directions.  My first urge was to correct the one that was hung the wrong way.  Then I perceived that it was not my place to change the way Stephen and Lilly appointed their home.

When I rejoined them on the deck, I asked Stephen why the toilet paper hanger had replicated itself.  He smiled broadly because, as I was to learn, he loved telling this story.  It seems that he and Lilly had disagreed for over ten years about how the paper was to be placed on the roll.  One day, when they had argued about it, he put up the second roll in anger.

The result was not what he expected.  Lilly was thrilled and bought second holders for the other two bathrooms in their house.  Stephen realized that his angry response had led him to a suitable compromise.  He lovingly put up the other two holders.  Since it was just the two of us talking, I had to ask if the usage did not reveal which was the preferred method in the home.

He smiled as he explained that this became obvious within a month.  He sounded a bit smug as he informed me that his preference was the most popular one.  Then he said the thing that was the real solution to the problem.  He told me that to keep Lilly from feeling like she has lost in any way, he routinely switches the rolls as they diminish so that she thinks they are used equally.

I hope that someday they get to the place where the roll direction does not matter.  I am not there yet but that is another story.   What I admire is Stephen’s commitment to his wife.  What I must learn is how much it just does not matter which way the roll faces.  It is of no real consequence where one squeezes the toothpaste tube.  There are a thousand preferences that we turn into points of contention each day.

The thing I must face is that among all the ills of the world, the petty things just do not matter.  The things that are preferences and not things over which we should ever argue.  We must attend to love over anything that arises as a point of contention.  If I am to follow Christ well and become unoffendable, it is you that must take priority over preference and convenience Dear Reader.  We must not create offenses over things that are preferences.