Yesterday I needed gift bags for the gifts I had for my Grandsons.  I went to one of those stores where everything costs a dollar because I knew that I could get two of the right size bags for a dollar.   As it turned out, the store I chose had an adventure for me 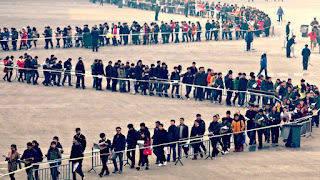 I quickly found my gift bags and perused the aisles for something to fill out the bags as what I had was small.  Then I proceeded to the checkout.  There was a line.  It was at least twenty people deep. Apparently, there was only one employee in the store.   As I settled in to await my turn to check out, the entertainment arrived in line three people behind me.

This lady had a single birthday card   She immediately assessed that she was going to have to wait to pay for her card.  Her next thought, expressed loudly was to complain to God about how she did not have time to wait in such a long line.  As the line grew behind me she included another lady in her complaint.  As the ladies and God conversed about the terrible inconvenience, I met eyes with the lady directly behind me with two baskets filled with glassware.  She quietly rolled her eyes as if to wish away the complaints without complaining herself.  I could tell that her baskets were heavy and offered her my trolley.  My three small items were easy to hold and she gratefully accepted

She expressed a little concern over the wait so I introduced her to my waiting in line math.  I had counted the people between me and the register.  It was 23.  Of that 23, there were three adults with children; 2, 1, and 3 respectively.  This meant I could subtract 6 from the 23, leaving 17.  The young lady smiled as she realized what I was doing.

She added to the distraction from the waiting by offering that she was getting wine glasses for a wedding rehearsal dinner and that she had been to three other stores to get enough of them.  We talked about the menu and her concern over getting the meal just right.  The line kept moving as we enjoyed our single-serving friendship.

The two ladies behind us kept trying to get God to complain about the line with them.  As I paid for my items, I thank the clerk for being so speedy and consistent.  The nice lady with the wine glasses approached the clerk as I was leaving.  She explained that she would need each of the glasses wrapped for protection.  The prayer ladies behind her became sure that God was not listening and prayed louder, or were they swearing and including God?  I could not be sure.

What I was certain of was that I got to use kindness and love to make someone a little more comfortable and put a little fat into my soul.  That alone, Dear Reader, was worth the wait.